Home » Disorder » How to Choose the Best Sleeping Position for Sleep Apnea? 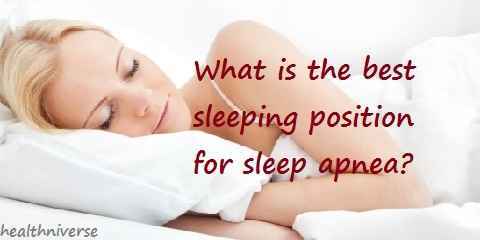 Who Suffers from Sleep Apnea

Anyone can suffer from sleep apnea. This disorder can be suffered by anyone at any age, from grown-ups even to children. However, only certain people who have higher risk to suffer this sleep disorder.

Sleep apnea most affected on males in their 40s who is overweight. People who have big neck size, tonsils, tongue, or small jaws are at higher risk of suffering from sleep apnea. A person who has a family history of sleep apnea can also, at higher risk, be affected from this disorder.

Sleep apnea is divided into several types. The first one is Obstructive Sleep Apnea or OSA. This kind is more common form of sleep apnea. OSA is caused by the airway blockage that happens during sleep. It occurs when the soft tissue in the back of the throat collapses.

The second type of sleep apnea is Central Sleep Apnea or CSA. It’s not the blockage of the airways but the failure of the brain to signal the muscle to breathe. It occurs because of the respiratory control center’s instability.

Sleep apnea is not impossible to treat though. This sleep disorder can be treated by doing some home treatments. Start by changing your lifestyles. Changing your sleeping habits is one of them. Getting a plenty of sleep can reduce the apnea more.

Lose some weight can manage your sleep apnea since obesity or overweight is one factor that can cause sleep apnea to occur. Lessen the use of alcohol and medicines are the next treatment which helps reduce of sleep apnea. Sleep apnea is still treatable whether you treat it using home treatments or choosing the correct sleeping position.

Which Position is the Best? 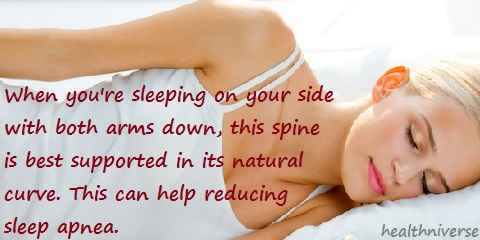 Position of sleeping has the important role in treating and reducing sleep apnea. I’m sure many people have their own favorite sleeping position. But for those who have chronic sleeping disorder choosing the proper sleeping position is greatly important to provide them comfort and guarantee a better sleep.

The best sleeping position for someone with sleep apnea depends on what type they are suffering from. For obstructive sleep apnea (OSA) sufferers it is better for them to sleep on their side according to a research.

So if you suffer from OSA it is suggested you keep off from your back when you are sleeping. This is called positional sleep therapy. It is said 50% works efficiently for sleep apnea sufferers. It can lessen the discomfort they experience during sleep.